I will try to keep it short and go straight to the point.

You might be starting to worry about the update this time now, about how slow it is. But I'm not holding back and try my best to do it as quickly as possible. And it's about to finish! I need a little more time to complete this last scene with Sada and will release the 0.16.0 around the 24th of this month. I know it sucks to wait, and I feel bad too.

Hope you guys' good health, and I'll see you there.

glad to hear the new update will be here soon, dont overwork yourself my dude. youve made a great game, and the characters are all quite lovely. story isnt bad either so its an enjoyable experience so i look forward to the next bit of story. if i had to comment on something id say some of the names are trying too hard to sound japanese (tf is a yamiyo)? i guess its too late to change the names but if you do id consider researching japanese names that sound a bit more believable. theres a wealth of info out there that u can use. aside from that little thing tho no real complaints. keep up the amazing work dude

when will it be updated again? It's been more than 6 months without updating

Love the basic premise and the characters. The English is .. pretty awful much of the time. And the plot being progressed by characters simply not communicating information, when realistically they would (Kimiko would know who Mei's Master is), is one of my most hated aspects of bad writing in TV and film.
But there was enough enjoyment for me to play to the end of current content. Hope the next instalment comes soon.

Dev, if you would like somebody to check the English, I'd be willing to help.

The grammar is often bad, but sometimes it's endearing. I might actually miss the bad grammar if it was all corrected.

Reply
The Grimace48 days ago

Good shit. I hope you return to us soon.

Wait, the game has this good of a twist?! Fuck! This is good shit!

That scene in the castle? *chef's kiss* Masterpiece.

this one gets it.

how are the people born if there are no man? can anyone explain

Let's hope we get a dev comment maybe on a more recent activity :/

The problem with that is that you and me don't have the same saves tho :/ by I have no idea what save it is , I mean that amongs my set of saves I don't know which one would be the closest ... if even any would be remotely close , because when as far as i remember the bathroom I had it for a long time and I was sure that it was able to do later in the game , and now that task is literally the only thing i have left.

I rly like this game but i cant wait for an update anymore, when will there be the next update?

There's much I dislike about Dark Magic, but I saw so much potential, I had to make an itch account just to thank you. I happened upon Dark Magic by accident a week or two ago and now I'm addicted to visual novels, mostly your fault. :) Thanks for recommending The Headmaster too.

First, I'm not into incest, so attaching that to the main route at the beginning of the game was a major turn off for me and I almost didn't continue, but I saw enough potential in the game to struggle through that, and the corruption, because most of these characters are sweet enough to deserve better than that, so maybe we need more villains to corrupt, but after everything I feel well rewarded for getting past my concerns and continuing to press forward to the current end.  Red's story got much more interesting in the castle at the end that was a great little cliffhanger there, extremely good scene, very dramatic, it almost gave me goosebumps, well done. It so pulled me into the story that I will absolutely be waiting for the update to see how the story unfolds. Some of the humor in this story was laugh out loud funny, so good. I would have really missed out if I had given up on this game at the beginning. I especially enjoyed Momoko's lighthearted character, even though the relationship is weird. I think there's too much Aeri and Nami though, they get more time than almost anyone, much if it required to continue the main story, and they are possibly my least favorite characters, especially Aeri, largely because of the incest thing.

Am I remembering correctly that there was one very brief overlooked moment at the beginning when the story says the player character was found on a beach and adopted? Or am I just wishing that into existence?

I wish the gameplay was more sandboxy from the start, so I could just progress Red's story without being forced into having sex with characters I don't like. Okemia is a great character though, I enjoyed every scene with her and wished the earliest training scenes with her were more involved. If it was only Red and Okemia I'd be happy, though Rurico looked super sexy in the Halloween scene, very lovable character too, so I'll be looking forward to her storyline progression as well.  And Mihina. And I better stop or Ill just keep writing forever. ^_^

Last time I checked this game hadn't been updated in a while. Glad to see it's still being worked on.

The character's are great and their is a LOT of content already.

Haven't had a chance to play the most recent update but i'm very much hoping there is more content with Nami and Taka.

Taka was nice enough that I almost forgot I will forever curse cops for being tyrants, slavers, kidnappers, torturers, thieves, liars, and murderers.

I want to support the revolutionaries fighting for freedom from the royal/race-based tyranny. Maybe the girl that was killed really deserved it  Can you explore these options?

[I don't understand why I get downvoted and insulted for standing up against tyrants, slavers, kidnappers, torturers, thieves, liars, racists, and murderers.]

when will it be updated again?

Her story was the first one I completed. Maybe I'm too monogamous.

Yasuko isn't the prettiest, but I couldn't help but complete her story first, I guess I'm a sucker for a damsel in distress.

I hated Yamiyo at first, but corrupt her out of her ugly clothes and she's quite lovable, same for Mihina.

when will this game be updated?

woah..im just finish playing this game.. well this is good story game tho, alot of mysteries in the story ..i need to play till the end man..this was really give me a big hope to see more update to come from you.. but there have one thing that making me annoyed ..why the hell is wrong with the mc face he's ugly af lol can you change it? lol

Maybe Red can cast a spell to alter looks.

The scenes are very good, and the story follows well, I would recommend it

does anyone know how to unlock Airi's 4th scene in the book of memory, its the only one i have left

It was only one short scene, kinda more magically-enhanced lesbian than futa, and I think most of it was optional.

When is new Update android?

I am pretty sure I am softlocked ... the bathroom is always locked so I can't peek.
I can't sleepover with momoko cause Kimiko is always here and I can't make her leave (apparently youre suppose to be able to do that in the evening but the only option I have is "leave".
And I can't give clothes cause Momoko is always sleeping ...
like wut ... ? 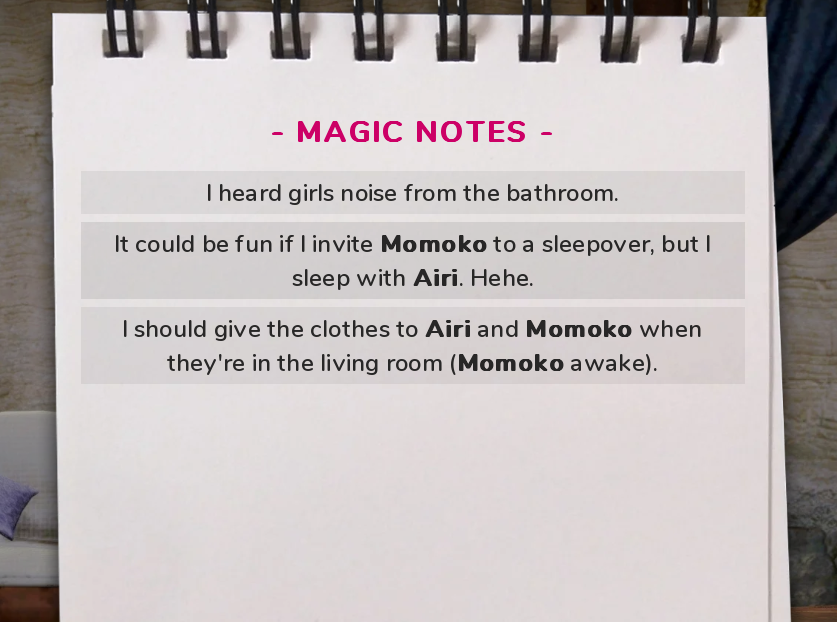 If you need to peek into the bathroom have tried using the peep hole in your room?

Yes , it works but it just peeps into the romm , it doesnt do anything

I am stuck around here and I don't know why

Reply
So gone144 days ago

Why i cant play this game on andriod?? Its just keeping the game close after the loading of the game

Is this game abandoned? The information section says it's Released rather than In Development. I ask because it doesn't feel like completely finished game

I hate how many of these visual novels use the same ugly ass main character.

Is there a code to unlock all memories? I just completed 15.5 and I somehow didn't get all the memories unlocked. Just want to see the scenes I missed

how often is the game updated? I want more yasuko content the most, i just finished her story and I want more so bad. She's awesome! also more scenes with the waitress would be awesome. she is a great character model and would love to see more stuff with her.

Who exactly is the futa character in this?

@SorataShirai, wut? Lmao. I'd be lying if I said I didn't get this game just cause it had futa in the tags, xD

If you go to the mine for the first time in the evening, you're trapped there. You're only option is "work", but because of the time you can't work.

What's the difference between corruption and when it says a girl likes me more?  Does their liking me more have an effect on events?

idk if stuck on glitch or something main quest says to keep corrupting mom but shes at 100% ive spent few more days just trying to do more corruption to her but main quest hasnt changed. Any advice

haven't downloaded yet, just a question, is there an option to disable Futa?

does anyone know who the killer(s) is/are suspect 1,2 or 3

Does v15 end after the scene with our bodyguard (mirina/ don't remember the name ) ?

Anyway, Flord, if there is any way to support on steam (you just publish wallpapers pack/some basic pack or dlc), will be happy to support!

Wait, this game is not finished?

not the sharpest tool in the shed, aren't you?

To be honest, yeah. Im just genuinely asking tho, no need to be like that